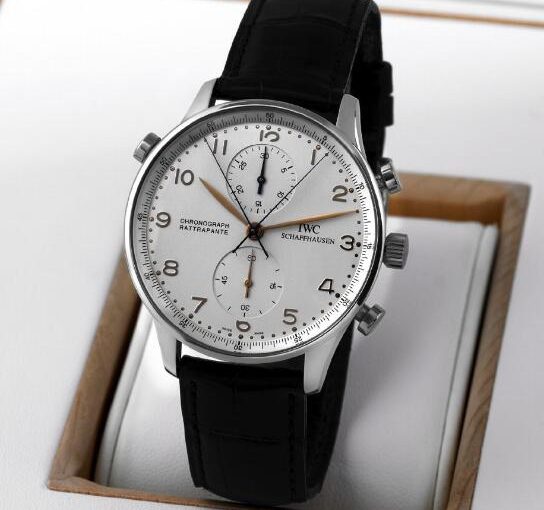 In 1939, Messrs Rodrigues and Antonio Teixera, the two merchants from Portugal wanted an accurate wristwatch, so they placed an order from IWC. At that time, the watchmaking technology was not as advanced as today and the it was a period of evolution from pocket watch to wristwatch in watchmaking industry. For timepieces, the smaller the movement is, the less accurate the watch will be. IWC adopted the Cal.74-a large movement from pocket watch to make that order.

Ref.325 was born and the three iconic features of appearance were Arabic numerals hour markers, willow-leaf shaped hands and curved lugs. The diameter has been increased to 42 mm as the movement is very large. Nowadays, it will be welcomed however, at that time, 34 mm was the most popular size. So only 304 pieces of Ref.325 were produced. The size of the case completely limited the sales of 42 mm imitation IWC Ref.325.

The condition hadn’t been changed till 1980s. In 1993, the brand released a large mode Ref.5441 with a pocket watch movement at the time of the brand’s 125th anniversary, which also represented that the Portugieser collection was founded. In 1995, IWC launched the Ref.3712, which was the brand’s first chronograph timepiece. It was mentioning that the steel case fake IWC Portugieser was not the commonly seen chronograph, instead it was the complex split-seconds model.

20 years later, the current IWC Portugieser looks very similar to the original Ref.3714. There aren’t obvious change between them.